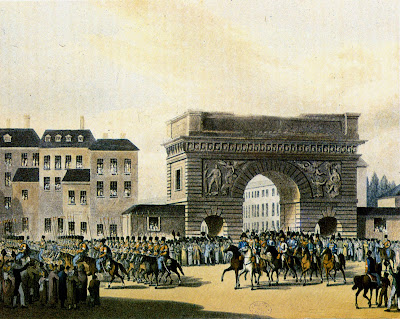 The Western border of Muscovy shown on the map is represented in the figure by the blue line. 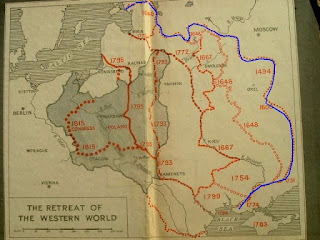 The Eastern border of Muscovy is shown in the pictures with a red line. This is the line of military fortifications, which have survived today. This is the Eastern bank of the Volga river. 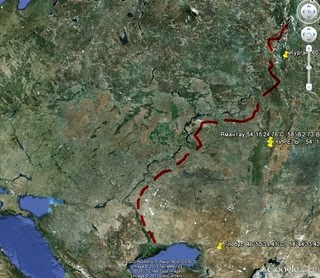 The fortifications represent a typical European fortress and the walls of the Bastion type. The line of fortifications now known as "Zavolzhsky historical shaft", stretches for 2.5 thousand kilometers from Astrakhan to the North, with  bends to the East. 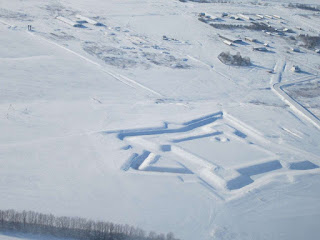 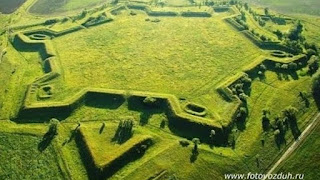 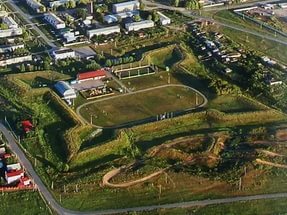 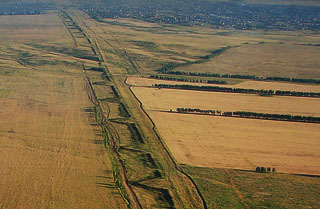 The builders of all those structures were the Germans, the settlement of which remained around Kharkov and Mariupol, as well as in the district of Saratov, where they are known as the Volga Germans.

European Roman Caesars introduced "serfdom” in Muscovy, by analogy with the slavery of the Roman Empire. But in the occupied part of Russia cruelty was impossible, because the population just killed the cruel ruler and burned his estate, then went to Tambov, to the Don, to the Volga.

Russia continuously attacked the trade route of the invaders,  the communications were interrupted again and again. The Cossacks of Zaporozhye and the Urals actively stepped out against the occupation authorities . The troops from Siberia also participated. The most well-known names are: Pugachev, Stepan Razin, Bulavin, and many others.

In modern history they are called robbers, but it is not correct. For example, Pugachev everywhere was met by the local authorities as the Russian Tsar. He led the attack from Siberia and the Urals from the East.

Alexander the Ist is the first Russian Tsar in Moscow, after 200 years of rule there by henchmen of Europe. Alexander the Ist strongly lustrated all who served the old regime, including the famous Fyodor Ushakov. Nobility and merchants were obliged to prove their loyalty to the Russian authorities and to actively help the Russian army. The Tsar did not compensate anything to them. It was a payoff for their past cooperation with the enemies of Russia.

Napoleon came through the Baltic States, with a plan to recapture the Moscow  trade route from the Baltic Sea to Astrakhan with access to Iran and India. Napoleon retreated from Moscow strictly due West to Paris.

In 1812 the Russians deliberately burned Moscow. The thesis was this: "To win, we need to burn Moscow!" During  the advance of Napoleon onto Moscow, the patriots went into the army to defend Moscow and evacuated their families from Moscow. In Moscow stayed the entire liberal elite of the West. Those were the supporters of the old regime of Europe in Moscow. They were preparing to meet Napoleon with flowers, to greet him. Moscow was burned down together with Napoleon's army and  those rats, traitors of Russia.
On  March 30, 1814, Russian troops and Russia's allies entered Paris. The power of "Roman Caesar" was abolished throughout Europe. Russia’s  allies signed the Holy Alliance of 1815 that they will always together confront similar threats in Europe.

The Russians didn’t kill Germans, whose settlements were in the Volga region and in Kharkov, Mariupol and left them to live with them. The Germans, too, stepped out together with the Russians  against Napoleon. Later Germany also signed the Holy Alliance of 1815 with Russia.

Tsar Alexander the Ist removed the former elite from power in European countries.
"The power of Alexander the Ist was great. He led the movement for peace, majestically ruled the process of the Congress and presided over the meetings of the monarchs. He was granted the ability to see how people, not inferior to the greatness of Caesar, paled in his presence" (revolutionary Louis Blanc in his "History of the Decade").