Doctor of Technical Sciences, Professor Igor Ostretsov
A response to the article by A.Kolmykov
"THE CHERNOBYL ACCIDENT WAS A TERRORIST ATTACK.
ARTICLE FOR LAWYERS AND INTELLIGENCE SERVICES"
http://www.cneat.ru/chernobyl-en.html
http://russ-history.blogspot.ru/2015/04/the-chernobyl-disaster-was-terrorist.html

Causes of accidents at RBMK units


The end effect in the RBMK reactor has arisen due to the poor design of the rods. Structurally, the rod consisted of two sections: an absorber (boron carbide) in length to full height of the active zone and a displacer (graphite), displacing water out of the channel CPS with fully extracted absorber. The essence of the effect lies in the fact that under certain conditions during the first seconds of immersion of the rod in the active zone positive reactivity was introduced instead of the negative.

The existence of the end effect was discovered in 1983 during physical triggers of the 1st unit of Ignalinskia NPP and the 4th unit of the Chernobyl NPP.
The positive steam coefficient of reactivity (PCR).

During operation of the reactor through the active zone, water used as a coolant is pumped, but it is also a retarder and absorber of neutrons, which significantly affects the reactivity. Inside the reactor, it boils, partially turning into steam, which is the worst retarder and absorber, than water (per unit volume). The reactor was designed in such a way that the RCC was positive.

In the late 1970's, early1980's, a program was developed to finalize the RBMK reactors in order to eliminate fundamental design flaws in them. The program was not implemented for unknown reasons.

In May 1986, I was a member of the commission of the State Committee for Science and Technology of the USSR (SCST) for the analysis of the safety of all types of reactors used at nuclear power plants of the USSR and countries of people's democracy. Regarding RBMK reactors, the Commission fully confirmed the conditionality of all previously planned activities. Concerning the events at the Chernobyl nuclear power station, it was noted: on April 25-26, 1986, in preparation for the experiment as a result of the experiment, the head of the CPSU Central Committee, who supervised the nuclear power industry, Mr.Kurchinsky, who previously worked at the Chernobyl nuclear power plant as the chief engineer with the requirement to delay the experiment, the reactor fell into the "iodine pit," i.e. in a state with a very small margin for reactivity, as a result of which, in violation of the regulations, almost all the CPS rods were withdrawn from the active zone. This regime (the "iodine well" regime) in the nuclear safety volume was not identified as nuclear-hazardous. The representative of the "CI" A.Ya. Kramerov answered the questions of the Commission members that "there was not enough time for the appropriate calculations on the BESM-6 machine and that the RBMK is not an industrial facility, but a" physical device "that requires appropriate treatment." The Commission's conclusion, like a whole series of appeals with such content, was laid "under the cloth."

In June 1986, the Plan of Priority Actions of the Ministry of Medium Machine Building (MinSredMash) was formed. It appointed exactly those actions that were aimed at a real prevention of the explosion: changing the regulations, reworking the control system. Thus, MinSredMash did not doubt about the reasons for the explosion. Apparently, the blast at the reactor was initially planned at the Leningrad NPP in 1975. Thank God, it did not happen there.

To eliminate the consequences of the Chernobyl catastrophe, more than the annual budget of the USSR was spent. As a result, the Union collapsed.

"The successful experience of Chernobyl", apparently, today inspires the modern guardians of the idea of ​​"golden billion" for further "feats."

A detailed analysis of satellite data carried out by the Rhine Institute of Environmental Problems at the University of Cologne (link) produced an unexpected result. The radiation source is not at the Fukushima-1 station, it lies tens of kilometers east of the coast of Japan, in the Pacific Ocean. Moreover, it coincides with the epicenter of the most devastating earthquake in recent years, which has caused numerous casualties and destruction in Japan, as it caused an even more devastating tsunami.

In addition, another interesting detail is mentioned - a funnel formed in the ocean after the "earthquake" on March 11. Photos of the huge whirlpool, capable of carrying even powerful ships into the abyss, got into all the world news agencies, but why it was formed nobody could give a believable version. In the opinion of the Chinese analysts, the funnel arose due to subsidence of the bottom after an underground nuclear explosion.

The tsunami was a point source, judging by the wave propagation, which is very rare for underwater earthquakes. With an earthquake, a large enough surface of the earth serves as a wave generator, as a result of which the tsunami wave has a very wide front. As a result of this earthquake, the front of the wave was rather narrow, which indicated its local, almost point source near the coast of Japan.

Fig. 2. Comparison of seismic data of a nuclear explosion and an earthquake.

Fig. 3. Seismic data on the explosion of the Fukushima nuclear power plant.


Causes of Fukushima
The world produces about 40 thousand tons of uranium. The nuclear power plant consumes about 60 thousand tons. 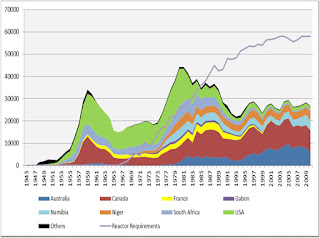 Fig.4. Data on the production and consumption of uranium.

Fukushima was blown up to prevent the shutdown of about 50 reactors at nuclear power plants in the eastern US after the termination of the HEU-LEU program in 2011, through which these reactors operated.

Ukraine holds the tenth place in the world in terms of the number of power reactors and the fifth in Europe, all types of WWER. In Ukraine there are 4 nuclear power plants with 15 power units. In 2014, the generation of electricity at nuclear power plants exceeded 50% of the total output. Until 2011, all nuclear fuel was supplied from Russia by TVEL (link). In 2008, Ukraine set a course for diversification of fuel supplies, having concluded a contract with the American company Westinghouse Electric Company (link)  for the supply of at least 630 fuel assemblies during 2011-2015 for the stage-by-stage replacement of Russian fuel for at least 3 power units with VVER-1000. In November 2015, Minister of Energy and Coal Industry Vladimir Demchishin said that Ukraine in 2016 plans to use fuel from Westinghouse (link) to 3 out of 15 nuclear power units: at the 2nd and 3rd blocks of the South Ukrainian NPP and on the 5th block of Zaporizhzhya NPP.

In 2017 Russia-US contract ends for the supply of fuel for US nuclear power plants made from "bomb" uranium (continued HEU-LEU program - link).

Japan insists on launching about 20 of its reactors. The only way out is to stop the reactors of Ukraine. After the beginning of events in Ukraine, I wrote an article "The Second Fukushima", in which I said that the purpose of the operation was to stop the nuclear energy of Ukraine in order to maintain a positive fuel balance for the nuclear power plant. The worst option is that Westinghouse's fuel supplies are manufactured for this purpose. In this case, emergency meltdown of the active zones of Ukrainian NPPs can be staged. Therefore, I wrote a letter to the management with a proposal in case of emergency to stop Ukrainian NPPs due to "failure" of steam generators (PG).

With a mass outage of PG VVER-1000 in the late 1980s, I was a member of an interdepartmental commission to analyze this event. In modern conditions, it is impossible to produce a sufficient amount of PG in our country, and in the West, they have another technology. After the collapse of Ukraine (60% of electricity generation at nuclear power plants), Europe will collapse after the "forced" termination of supplies of organic energy. Apparently, such a decision was made, since today one large energy consumer needs to be liquidated. Today there are three of them: the United States, China and the European Union.