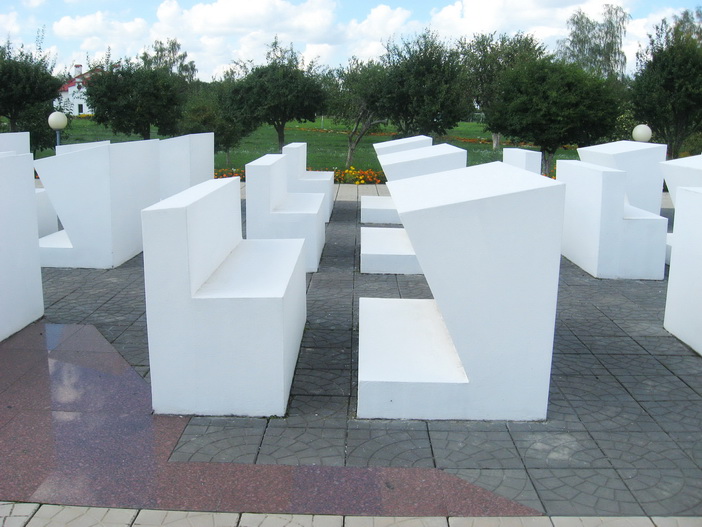 Cute benches? White, neat, made out of concrete. Whoever remembers school benches wilI remember sitting at school behind such a bench. That’s how it was conceived. These benches and are supposed to depict a school class. Not a regular class, but a dead one. And the river of blood flows from it. The river of children's blood. 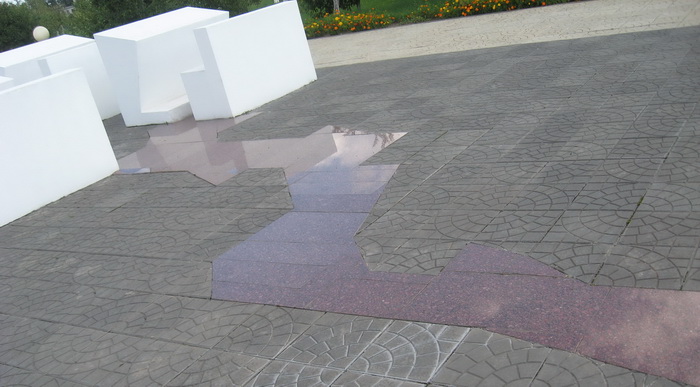 It is a memorial in the village of Krasny Bereg (Red Bank)in the Gomel region in Byelorussia. “Red” in the Russian language is similar to “beautiful” and has nothing to do with communism. In the Red Bank village during the war there was one of the most horrible concentration camps of World War II. Here the Germans gathered the Russian (Slavic) children aged 4 to 15 years  in order to drain their blood. Children's blood was intended for transfusion to wounded Germans in hospitals. It was believed that children's blood was more healthy than adults’, that’s why it was drained out of the  children as much as possible.

Children were washed in the bathhouse  and corralled in the hall where they waited for their turn. Two of the rooms were equipped as laboratories. A child was seated on a chair, and his little arm was slipped into the hole in the wall, where they pumped out children's blood to the last drop. The dead children were then taken away and burnt on a huge bonfire in the shape of swastika.

Says the guide of the memorial "Belarussian children — victims of fascism" Alexander MANKIEWICZ:

Children came not only from Gomel province, but from Mogilev province,  partially from Minsk province, from Ukraine, the Baltic States, from Smolensk, from Bryansk province. The children were collected by the Nazis wherever there was a war. And basically they took the blood from Slavic children from 8 to 14 years old, i.e. during the period of most active hormonal development  and when the blood is most pure.

During sorting out some of the kids even wanted to get into the donor concentration camp. They had heard that the Germans did not beat children there, that the kids were washed almost every day and for lunch were given sweets. To die was not painful — the bleeding kids just fell asleep. Forever.  To those who still showed signs of life, German doctors out of humanity daubed their lips with poison.
The invaders kept about 2000 children there, mostly girls from 8 to 14 years. Blood type 1 and positive RH factor is most often found among them. A friendly lady  in a white coat often came and took children away in groups. Then they put them on the tables tilted and slipped their slender arms into the holes in the wall. The blood was taken completely and the bodies were burned.

Also here, in the RedBank village was tested a new, “scientific” method of drawing blood. Children were hung under the armpit, clutching their chest. To avoid blood clotting , a special injection was done. The skin on the feet was cut off — or they made deep cuts. All the blood flowed in sealed bathtubs. This was done in theory. In practice, the Nazis cut off children’s feet and drained out the blood. The bodies of the children were taken away and burned. 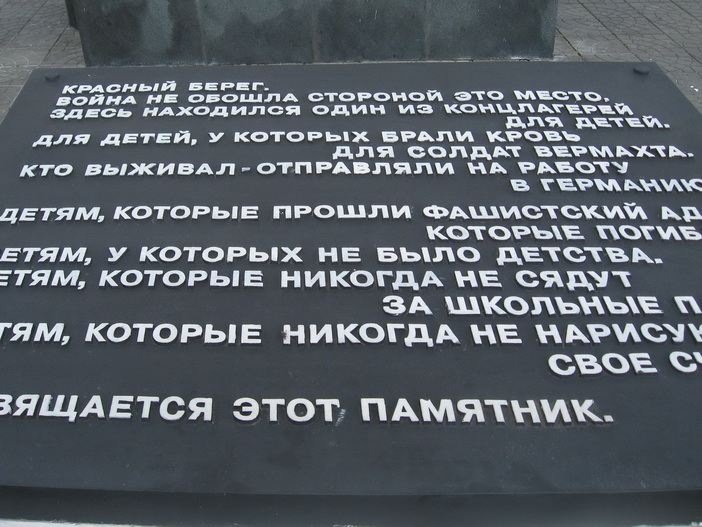 At least 2,000 children have passed through this terrible place. Most of them died. Whoever was stronger  and survived, those were sold into slavery to Germany. Only 9 people have survived. 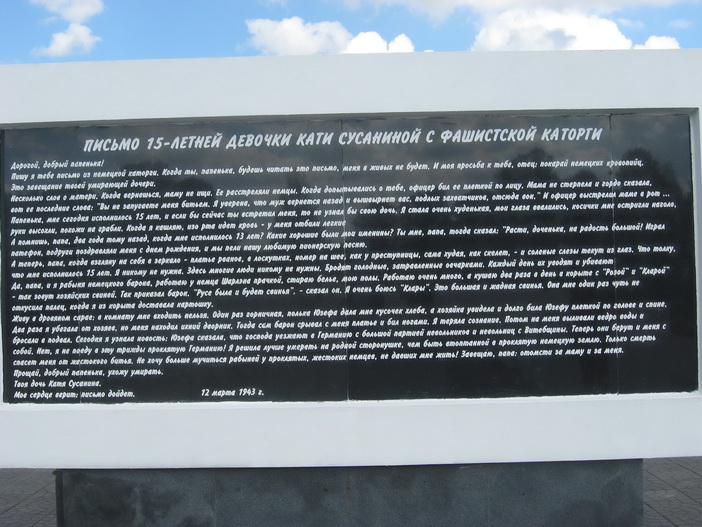 On the black board this "the Dead class" is reproduced a letter by one of the girls trapped in the hell of slave life. The mind refuses to accept those simple words, so horrible is what writes this girl, one of many-many thousands. 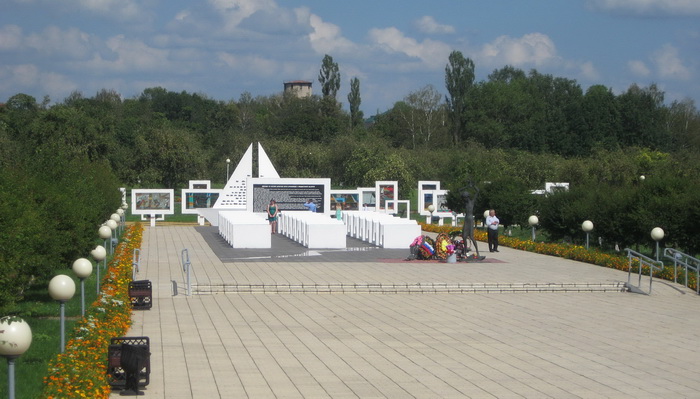 Those who sometimes  begin to idealize the Germans, saying  they behaved culturally, it would be  useful to bring them to Red Bank village and tell them what happened there, how "cultured" Germans acted there. The memorial is not pretentious, it is a small area surrounded by apple orchards. 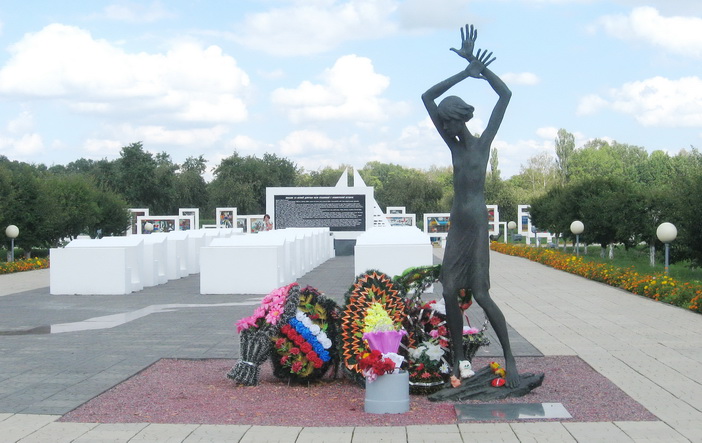 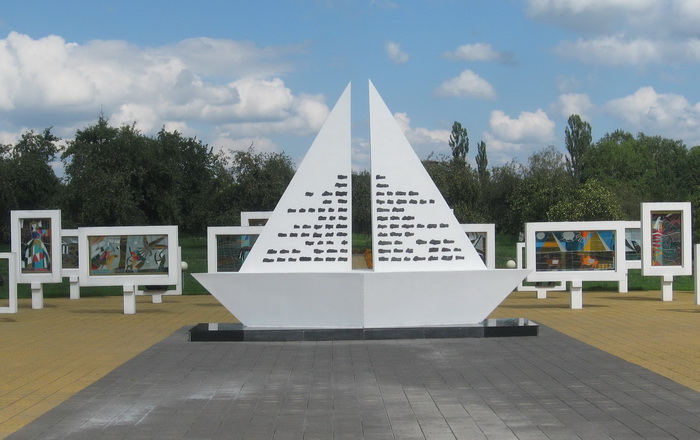 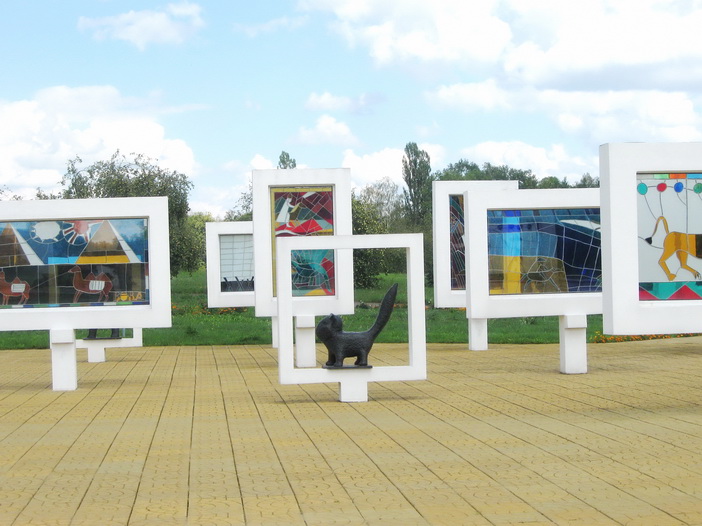 A sculpture of a girl with thrown up  hands in a pathetic attempt to defend herself, "the Dead class", the boat of broken dreams, the stained glass windows made of the children's drawings – that’s it. Oh yes, there’s also a map of children's camps on the territory of Belarus, as Red Bank village was not the only one. There were 14 of them. 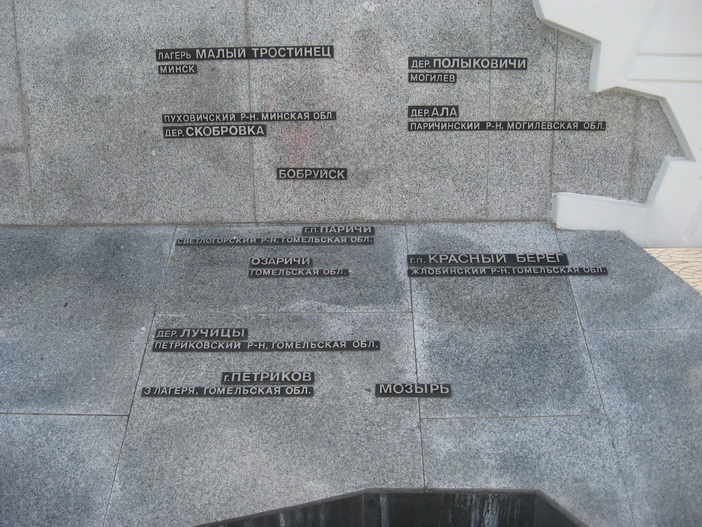 Last week they showed the Pope's visit to Auschwitz, how he walked around, bowing down to show off himself for the public, and around him was a bunch of photographers clicking their cameras.

1. It is reported that in the camp 2000 children were killed. But the blood from 2000 is too small for even one major hospital of  Wehrmacht. Perhaps  a lot more were killed, but the information is not there?

2. If only 2,000 children were killed, then how to explain the burning of the bodies in the shape of a cross (cross of the Nazis) and hanging the children to drain their blood? Doesn't this look like typical Jewish blood rituals? Weren’t those killings ritual killings with the collection of blood for occult (magical) purposes?

3. Given the active participation of Jews in the financing of Nazi Germany, we can assume that the camp worked for a different purpose – to provide blood for the rituals of Kabbalists? The investigation must involve experts on crimes of religious cults.

It’s good such memorials are made. The old people who remember the war are dying off, soon there’d be no one to tell you what was happening in the war on our land. To forget this is impossible. If such tragedies are forgotten, they can be repeated. Genocide has no Statute of limitations! Lawyers should start to work. All Russians are waiting for this work and do not see any activity of the security services. I submit to all the five articles to guide the investigation in the right direction.

I’m appealing to You to actively demand from the authorities of Ukraine, Belarus and Russia to work against the international criminal group of Jews and Anglo-Saxons. They are alive and are preparing a new genocide!


In preparing the articles used: