Why London Blew Up Palmyra and Cut Off the Scientist's Head

Everyone knows that the "Islamic state", ISIL, is the TV project of London. All the headquarters of the "Islamists" are in London and the studios, which show to the world stories from the Middle East about the atrocities where a man with the London accent with good academic language is in front of you before he cuts off the heads of Muslims and Christians, work there too. Please note, not the heads of Jews!
So what happens in the Middle East? Real genocidedoes! Those are war crimes of private military companies, which are paid for the number of people killed, for the destruction of monuments of culture and history of the Middle East,for the burning of libraries, archives repositories of manuscripts and documents.
The war plan is known to the world. It is served with different abstracts for different audiences. 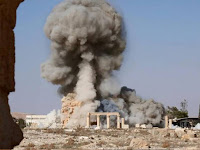 For the Zionists: "We’re creating Great Israel to the Euphrates! This is the Promised Land of the Jewish people! All must be destroyed and the land must be cleared up for the great Jewish people".
For the globalists: "There are too many people on the Earth. It is necessary to reduce the population and war is a legalized method of mass murder. Climate change is coming and we must destroy the people and make way for the relocation of more civilized people instead of wild natives."
For financiers: "This is a war for oil regions, a battle for the resources in the 21st century and for the future of the U.S. economy".
For religious leaders: "Islam is a religion of evil and a religion of war, it's bad."
For scholars: "If the number of young people in the state is more than 45%, they do not find work, they get radicalized independently and the war begins. This is an unguided, natural process".

It certainly is all interesting, but experts know that the war plan was written in the mid-19th century, when no one ever heard of that kind of pseudo-scientific ideologies.

In 1871, the American General Albert Pike of international Jewish organized crime group "The Illuminati" drew a military plan. There were planned three world wars and various revolutions throughout the world. This should lead a great conspiracy into its final stage.
The first world war should be waged with the aim of destroying the Tsar in Russia, to fulfill the promises of Nathan Mayer Rothschild in 1815, for the fact that Russia repulsed the attack of Napoleon and prevented the establishment of a "New world order" - a World government under the control of the Rothschilds. The Tsar in Russia should be replaced by communism, which would be used to attack religions, predominantly Christianity. The differences between the British and German empires were to be used to set up this war.
The second world war must be framed as a confrontation between fascism and political Zionism with the murder of the Jews in Germany, and become the cornerstone of the hatred of the German people. This is done so that upon destruction of fascism, created by the Rothschilds, to increase the power of political Zionism. This war is also designed to increase the power of communism to the level that should be a counterbalance to a unified Christian world.
(The Zionists did not know the plan and thought that Russia was just given to them —they engaged in the extermination of its population to create a Jewish state within the borders of the fictional Khazaria (they invented such a story). After the destruction of a significant number of the population within the borders of Khazaria, the state of Israel was created in Palestine as had been planned by Rothschild.)
The third world war must be unleashed by inciting hatred toward the Muslim world as opposed to political Zionism. Meanwhile, other countries would be forced to fight their own battles in different wars and with different problems until their mental, physical, spiritual and economic exhaustion. At the end  Zionism wins over Islamic world and everyone else. The result should be recognition by all of the World government as necessary for peace and prosperity.

On August 15, 1871 Albert Pike wrote a letter about Giuseppe Mazzini in which he stated the following (in the catalogue in the British Museum): "We shall expose nihilists and atheists, and we're going to cause large public disasters, which with all their horrors will show clearly to all Nations the effect of absolute atheism, origin of savagery and of most bloody turmoil.

Then all over the world, people will be forced to defend themselves against the world minority of the world revolutionaries and will exterminate those destroyers of civilization, and the people will be disappointed in Christianity, whose spirit will be from that moment without guidance , leadership, and will strive for an ideal but without knowledge where to send its adoration, they will receive true light through the universal manifestation of the Lucifer pure doctrine, finally issued in a public manifestation of the light. As the result of General reactionary movement will follow the destruction of Christianity and atheism - the conquest and destruction at the same time."

Albert Pike, the Grand commander of Scottish rite southern jurisdiction of Freemasonry in 1859 was at the head of the most powerful organizations of Freemasons in America. He retained the post for 32 years until his death in 1891. He also published a book on the subject in 1872 entitled, "Morals and Dogma of the Ancient and accepted Scottish rite of Freemasonry" in which he candidly stated the following:
"Lucifer, Light-bearer! Strange and mysterious name of the spirit Lucifer, son of the morning!”

Satanism still today is the ruling religion in the United States and in England, but they hide it. This is Satanism which is attacking all countries today. Jewish sect Chabad (USA) today, literally has the task to "spread the light", the same goes for Satanists - "light of Lucifer".

Thus, it must be clear that all countries of the world are being attacked by the international Jewish gang of the Rotshildos-Rockefellers. Britain and the Royal throne have been long ago occupied by Jews and the Queen of England is Jewish power http://russ-history.blogspot.ru/2015/07/history-in-heraldry-jews-have-taken.html

Intelligence agencies MI5, MI6 and the Mossad are working for this international organized criminal group. The religion of this gang is Satanism.
The gang consists of not only officials, but also of a part of the intelligence agencies of Israel, USA, UK, Switzerland.

From the abovementioned, no one must doubt that it is the Rothschilds and the Queen of England who gave the order to blow up Palmyra and cut off the head of the famous scholar of Syria -Khaled Asaad.

Why do they do it? They deliberately destroy the population and primarily its educated part, they destroy the history and culture in order to deprive the people of their past, their spirit and civilization to mop up the field for the introduction of Satanism as a new religion, "New world order" - World government.

In Russia all this has already happened and the New world order is actually the old one. It, along with Satanism, has already been implemented in Russia, we've all seen it and know about it. The new world order - it's actually our old friend - Trotskyism, Bolshevism, the Jewish revolution in Russia 1917 (http://russ-history.blogspot.ru/2013/04/in-us-govern-satanists.html)
UNESCO Director-General Irina Bokova called the destruction of the temple a war crime and called for an end to "cultural cleansing" in Syria. She noted that the attack on the temple was made a week after the murder of the archaeologist Khaled, who guarded the ruins of Palmyra for four decades, and the destruction of the monastery Mar-Elian. The head of UNESCO emphasized that a new crime may be qualified as a war crime, which led to huge losses for the Syrian people and humanity. (http://www.kommersant.ru/doc/2796083?fg).
Lawyers and intelligence services must finally start to work actively against the international Jewish gang of Rothschild-Rockefeller. Otherwise, the officers of the army will consider the inaction of lawyers and special services as their complicity in war crimes, in genocide not only in the middle East but in Ukraine as well, where the same gang conducts the war and carries it against Christians, against Orthodoxy, against Slavs, Russians http://russ-history.blogspot.ru/2016/03/2014-ukraine-ordinary-jewish-fascism.html

The history of the Jewish Rothschild gang development, a coherent history of the USA + Europe + Russia for 200 years, briefly: http://russ-history.blogspot.ru/2014/06/history-1800-2000-briefly-part-1.html

Obama: "There was never anyone more Jewish than I am in the White house" http://maxpark.com/community/politic/content/3505432