At the end of February 2014, with the participation of British intelligence services, the United States and Israel, there was an armed seizure of power in Kiev. The new government has declared Russian
language illegal and called the inhabitants of the South-East of Ukraine slaves.
The Crimea immediately rebelled and declared their independence.
After that, a referendum was held and the inhabitants of the Crimea, almost 96%, voted in favor of joining Russia. Russia has annexed the Crimea to itselfand took its population under the protection of the army. The observer from the European Parliament talks about the Crimea and thevote.

The South-East of Ukraine acted not so radically – it was for federalization as a part of Ukraine. It also did not like the new government of Anglo-Saxons and Jews in Kiev and they have launched a punitive action against the inhabitants of the South-East of Ukraine.
From the beginning, the Jewish plan was known - the extermination of the population in the territory of the South-East of Ukraine with the transfer of these territories to Israel and the Jews, with its capital in Dnepropetrovsk. Many did not believe that such a crazy plan was possible in the 21st century. Now we see that it is a reality. The Jews have really organized a fascist regime and embarked on deliberate mass murder of people – to do the usual genocide.

The representative of the American Jewish Chabad sect in Ukraine, an Israeli and Ukrainian citizen -Igor Kolomoisky, named Benya, President of the European Jewish Union (EJU). This very Kolomoisky, a Jewish tycoon with a fortune of $ 4 billion, permanentlyresiding in Switzerland, announced a reward for a Russian - $ 10 000. The photo shows a banner where it is written: "$10,000 for a Muscovite".WesternUkrainians call Russians Moskal. Poster: "Special offer from PrivatBank". 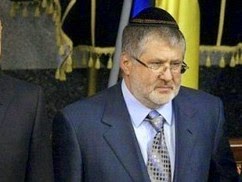 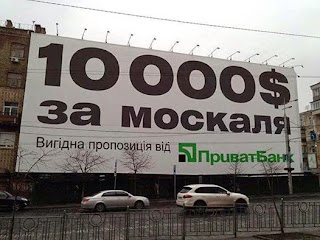 An army was sent to the southeast Ukraine, which was told that the South-East was captured by Russian soldiers. The army units on the site were convinced that this was a lie, and flatly refused to follow orders from Kiev. Military units moved en masse to the side of the people and disbanded. Equipment and weaponsended up in the hands of the insurgent people. It is basically light small arms and portable anti-aircraft complexes of combat vehicles and from the army warehouses in the South-East of Ukraine.

Due to the apparent reluctance to fight against own Russian people (the Ukraine is all Russian - Kievan Rus) Anglo-Saxons and the Jews that seized Kiev began to actively recruit mercenaries - private military companies of the West. The transfer of militants from Syria to Ukraine began and those willing to kill were armed. Thus a "new army" was formed where the activists are the divisions of the "Right Sector". "Right sector" are Jews and Israel - Jewish nationalists, whom the media actively call Ukrainian nationalists. The TV of Czech Republic way back in early March has notified that "the Right sector" (an analogue of the past Che Ka –Extraordinary committee) are the Jews and Israel.

Eyewitnesses from Ukraine pass eerie footage of civilians being killed not only with small arms , but also with the use of aircraft, large caliber artillery and systems of volley fire. Video Examples are below at 2 minutes and 22 seconds.


All this looks weird in the 21st century in the heart of Europe. But this is exactly so, and we are contemporaries of those events, it is in our generation that these events unfold in the presence of the UN and the International Criminal Court. Literally, the Jews lost their fear and decided that they rule and they can kill all the goim indiscriminately. That is, with the active participation of the United States, Britain and Israel a Jewish fascist regime has been established in Ukraine.
One can understand from the radio transmissions of the attackers how a system of genocide in the south-eastern Ukraine has been set up. Ukraine is a land of unfrightened Jewish fascists.

This recording isto be recognized as material evidence in the criminal case against Jewish fascism in Kiev and Kolomoisky personally. The content of the radio talks of Kiev fascists (see video above):

№1: ... you do not like dollars, you want the euro, but now wait two weeks after our departure. There was also no guarantee of the payment in Euros there . And you say you lose at the exchange rate sort of, greed has ruined the sucker.
№2: No, I work for good money, I'm not interested.
№3: It is necessary to have a conscience, we have an open channel, and you give the information, what the fuck? You ve'got $ 400 a day – is it not the money for you, or what?
№1: Did they put the password on the channel or not? Have you lost your marbles or what? I've been telling you such things! Moderators, set up the password, otherwise it turns out garbage, do warn!
№3: Exactly, exactly, the password is not set up, and you're telling.
№4: do they pay $1 000 for the corpses?
№5: Yes.
№1: Now they pay $800.
№4: there you go! We’ve just started falling’em and they already cut down to 800? In a week it will be $600? They’ve cheated us again!
№1: $1000 was given when there were few people. And now there are so many people that there’s not enough weapons, a lot of cartridges. Ammo is plentiful, but the problem is with arms. It is necessary that there is high accuracy (referring to sniper rifles). The price reduced because a lot of people already.
№6: Today received 800 gross.
№7: Well Kolomoisky offers $10 000. It all depends if that ribbon is tied (black & yellow St. George ribbon).
№3: I did not understand. To whom did you give? There are acceptors from Kolomoisky, and they do normally give. And you give to anybody.
№4: Earlier they went to the west, to Europe, walked in the forest, collected berries . And now all went east.. They say it’s fine.
№8: We give to the US, why do we need Kolomoisky?
№9: No, with Kolomoisky it’s bad. He demands discipline. By the time you check out if those are the ones-ours were sitting for 2 days until the test passed. It is easier just to kill a bunch and it’s half a day’s work without any drive.
№10: tomorrow I will send you the coordinates via SMS and take the tractor-trailer.
№4: Of course with a trailer. Last time I got tired to wash off the blood.
№11: Attention, bearded go for $1 200. I gathered ten and am waiting when they get fully grown (humor or the truth, it is difficult to understand).
№3: Kolomoisky takes the wounded, corpses he does not like for some reason (need confirmation from a wounded person?).
№12. Today called my brother near Donetsk. They were walking in a column and those grandmothers with the men blocked them. They had no markings on their uniform and they were shouting "For Putin! Russia to win!" and they beat the crowd with metal batons.
№14. We’ll drive up a trailer with high sides, but the blood flows into the cracks.
Number 4. No, Alex! Polyethylene is necessary to lay down, and everything will be fine.
№14. Blood runs in and everything stinks. Who carries the corpses this way? The poison of corpses penetrates into the paint and it smells so strong that you can’t wash it off.
№15. And I took a refrigerator on the base and stuffed the refrigerator, turned on zero temperature ...
№16. We have two cars changed. It runs into cracks and stinks so that it’s just awful! The cover is ruined completely.
№17. And did you shake the corpses? There must be money, gold crowns on teeth, gold rings on their fingers. The fingers should be cut off to make it easier to remove. We have the guys who made a lot of money this way.
№18. What gold, what fingers? We need to develop a budget. So, let's work together ... (by his voice – he is a Jew)
№19 - duty operator, girl: Good evening! Now the protest is in Donetsk, it is necessary to take action ...
The photos below show one of corpse carriers of Jewish fascists - front and rear. 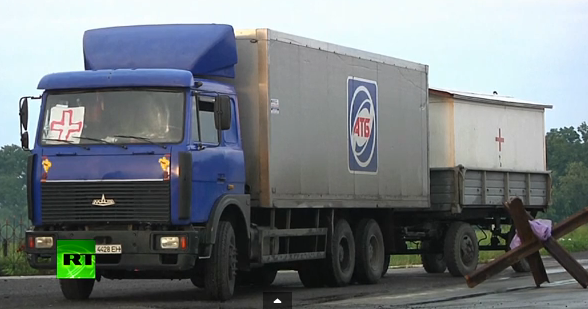 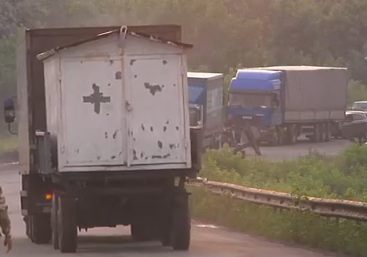 News 06/06/2014: As reported, in the Red Liman area they were actively checking passports and all men 18 years and older were shot immediately, some were taken away alive. Obviously, they were actively seeking not only"separatists", but specifically the citizens of Russia for the exchange of corpses for the money ... Later came the interrogation of a prisoner with information that thiswas the battalion "Azov" under the command of Mateychenko, MIA, Dnepropetrovsk (Kolomoisky)
http://www.youtube.com/watch?v=q-A5npYvqa8

Weapons were planted and people were arrested for weapons. People were tortured, killed and the money was collected. The bodies were buried or dumped into the water. All this had happened  in the history of Russia and Ukraine. The same Jewish fascism on the same territories -holodomors and deportation for the same purpose. The same zapadentsy from the west of Ukraine and the Jews have already slaughtered the Russians and all in Russia know about it and remember. It is necessary to start an international criminal case.
The new world order? For the old one they haven’t served their term yet! 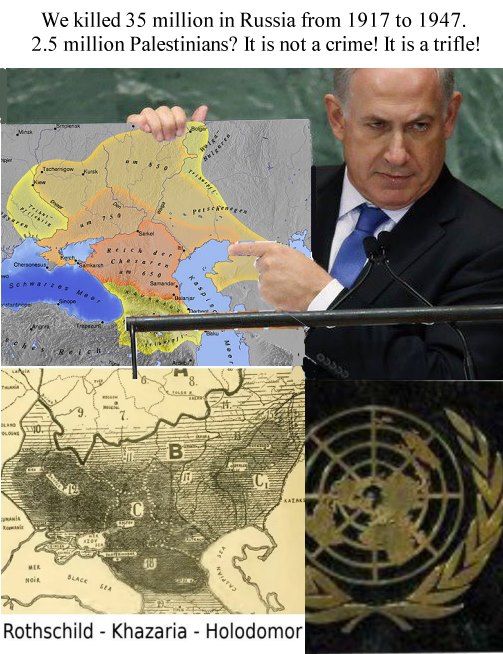 based on the fact of crimes against humanity in the Ukraine. Criminal proceedings were begun against a number of persons in the Armed Forces of Ukraine, against members of radical and extremist organizations, individual citizens of Ukraine, involved in violence against the civilian population. Kolomoisky is among the defendants in the case. All materials on all the facts and all the persons are being collected by the Investigative Committee of the Russian Federation. Send all information to Russia and the International Criminal Court.
We must act quickly. Genocide must be stopped immediately and the Jewish fascism must be condemned as in Nuremberg.

Revision of the Nuremberg trial – an article Russian in the international scientific journal USA. The main reviewer of the magazine calls himself a professor at Stanford University, and US Ambassador to Russia Michael McFaul.

What investigation, which courts? It is clear to the whole world that these reptiles must be destroyed! Rothschild and his organized criminal gang are waging a war against the entire world. 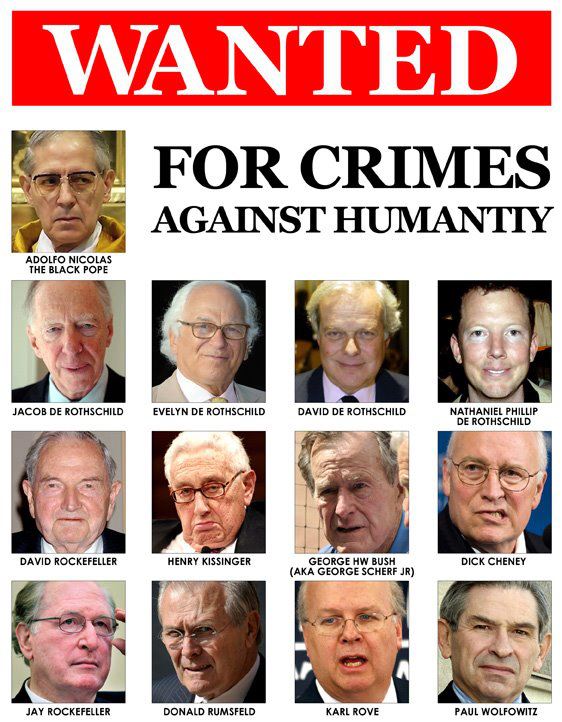 A manual of Ukrainian army for self-defense forces against the American authorities in Kiev. Instruction of 9 May, 2014. Everything is confirmed. 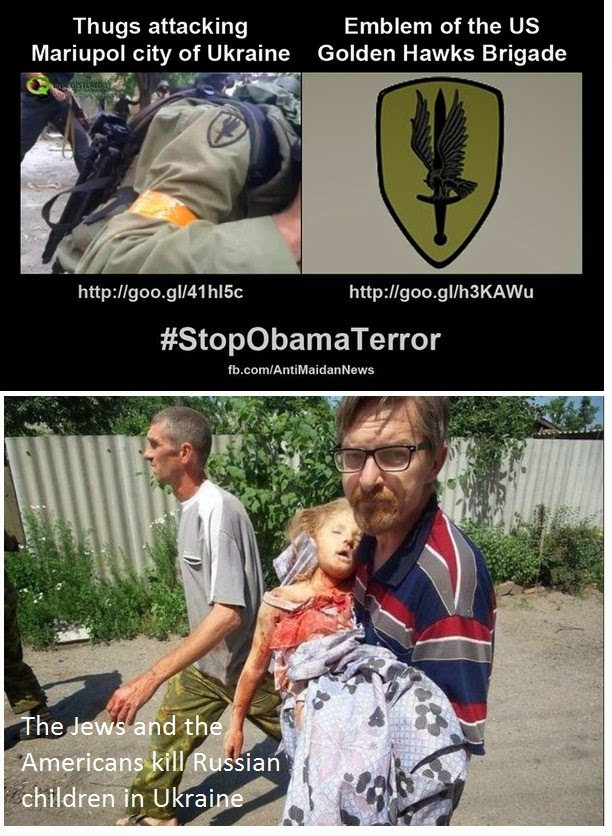 Israel is participating in the fighting in the Ukraine and is preparing to relocate the Jews instead of the killed Russians.
http://ant-63.livejournal.com/85128.html

Continuing the theme: War in the Ukraine. Jews are attacking!

Refugees from Slavyansk, Kramatorsk talk about events and shelling

Executions of vehicles with people is not shooting from closed  firing positions. These see exactly where they are shooting.

News 30 September. Detection of pits filled with corpses of civilians and militias with duct tape behind their hands. 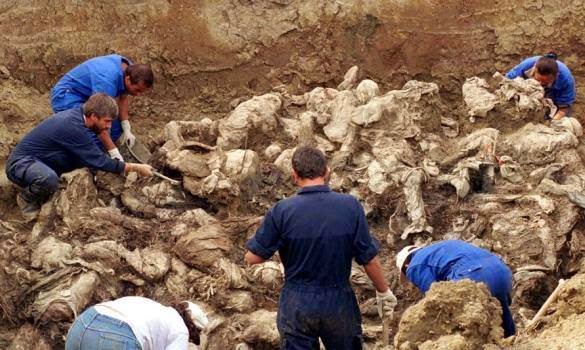 Azov Battalion killing detainees. In the video, the detainee is put a pot on his head and shot through it, so as not to get dirty (the reporter did not recognize the sound of the shot). The video was sent to the correspondent from Israel. Jewish Israeli instructors probably did this record.

Israeli instructors supervise the units of the Ukrainian army and, obviously, the artillery fire.