The Holocaust Is Cancelled! The Feat of the Police In Mariupol. Victory Day

The Holocaust Is Cancelled! The Feat of the Police In Mariupol. Victory Day.


On May 9, 2014 effectively ended counter-terrorist operation in the Ukraine and the war began. Jewish Nazis captured Kiev, came out of the framework of law and with an attack on the Mariupol city department of the Interior Ministry they started an open war against the Russians.

By default, the police are usually unarmed. Only part of the operational staff of the criminal investigation have guns, one person on duty at the entrance with an automatic weapon and an officer on duty with an assistant are armed with pistols. All the weapons are stored in the armory and in case of an unexpected major attack they have nothing to defend themselves with.

In Mariupol an agreement was reached with the local police - political supporters of federalization of Ukraine are not armed, and the police do not disperse them. It was a verbal agreement after the tragedy with the part of the Internal Troops (VV), and this agreement was carried out until the last days.

The personnel of Mariupol police were gathered at the meeting, the head of the Internal Affairs V.Andruschuk set the task to maintain order during the celebrations of the anniversary of Victory Day in World War II. Shortly after the conversation with Lyashko, who himself is subject to Kolomoisky (Chabad), Head of Department of Internal Affairs personnel V.Andruschuk said that the situation has changed and there is a new problem. At the order of Kiev the personnel has been informed about an alleged information that at the rally there would be a lot of provocateurs and that measures should be taken to the detention of the participants. In case of any resistance it was ordered to shoot without warning.

Andruschuk thus ordered the personnel to use force against civilians. Police officers notified their chief of Mariupol police they refuse to carry out his criminal order and would fulfill their oath - to protect the people. In response to that Andruschuk pulled out his gun and shot the company commander of the patrol and inspection service of militia, shot one of his subordinates, seriously wounding him. The staff tried to grab the head of Internal Affairs, but he barricaded himself in one of the offices in the building of the Internal Affairs and called on the National Guard for help.

Interior Ministry employees were declared traitors and have been targeted for the National Guard under "Right sector". Police officers have been blocked in the building of the city police department and were shot not only with small arms but also with grenade launchers, heavy machine guns and armored personnel carriers - from automatic guns of 30 mm caliber. By the time of the assault on the city streets there were a lot of civilians who took part in the procession and the celebration of the Victory Day. Soldiers of the "Right Sector" shoot to kill civilian, not allowing anyone to approach the police department building.

The building was not only fired at from armored vehicles and a grenade launcher, but was set on fire. At that time in the building were employees of the Interior Ministry, among the law enforcement officers there were women. The building caught on  fire from the first through the third floors. Inside pthere remained some defenders, police officers. The people tore off the lattice on the first floor and opened the way to salvation. On the third floor people were rescued from the fire by using a fire escape. The townspeople blocked the exit from the department and would not allow to take away the three captured defenders. The militants, at the request of the city residents to avoid collision with the mass of unarmed people, were forced to release the hostages. Firefighters, which for a long time were not allowed to approach the building by the National Guard (under the Right Sector), extinguished the fire. There is evidence that the fire engine was "allowed" to approach the building within a few hours, same as in Odessa. 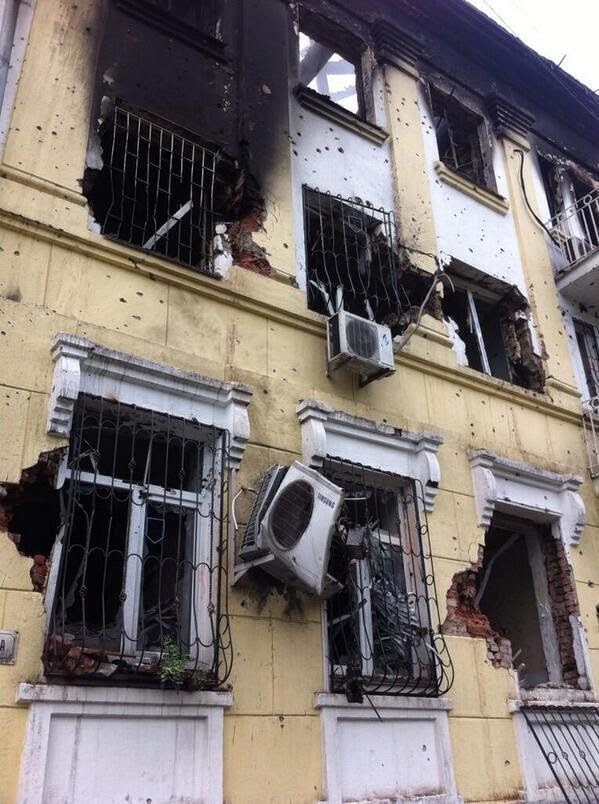 Andruschuk during the assault tried to escape. Local residents caught and beat him up. By National Guard under Right Sector Androshchuk was taken to the hospital. The photo shows Lyashko, who visits Androshchuk in the hospital. 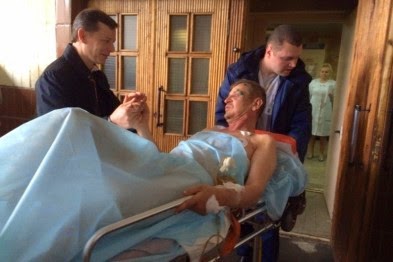 The Head of Security Service of Ukraine (SBU) in Mariupol S.Sklyarov also spoke about the causes of the events in the city: "This morning, the Kiev authorities have collected all the city's security forces, and declared that we all should go to their side. The policemen (except the chief of the city security forces UVD V.Androschuk)replied to them.. they were together with the people. Then to the building of the city police department drove up armored personnel carriers BTR and BMP and shot at the building. A fire started.  Whoever from the police had time he jumped out  of the building - how many people are now in the building -..we do not know. "

With regard to the losses among the personnel of the police department, it is certain that killed was the chief of the State Automobile Inspectorate (GAI) Viktor Sayenko as well as an employee of Battalion patrol Mikhail Ermolenko. The rest of the lists of the killed have not yet been published. The photo shows a police officer who was killed. 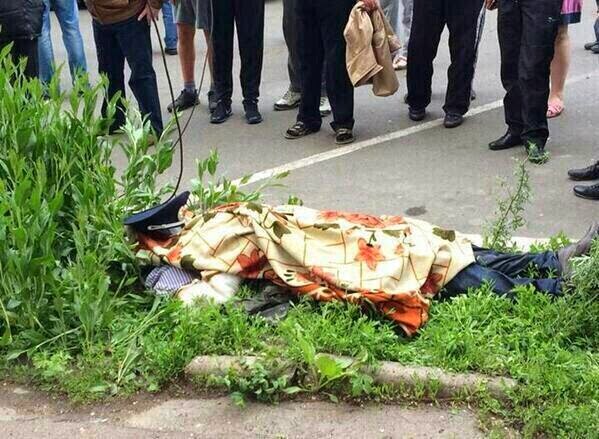 The survivor in the fire  policeman: "There is a pile of corpses in the building, it wasfrightening, I had to jump from the third floor, there was no other way. There were two chances, either burn down in fire, or take the risk; unfortunately the majority will be never seen, thank you for your support.".

The exact number of victims is not known even today. Jewish Nazis, having captured Kiev, conceal the information. The photograph shows a dead gunman, apparently of eastern appearance. 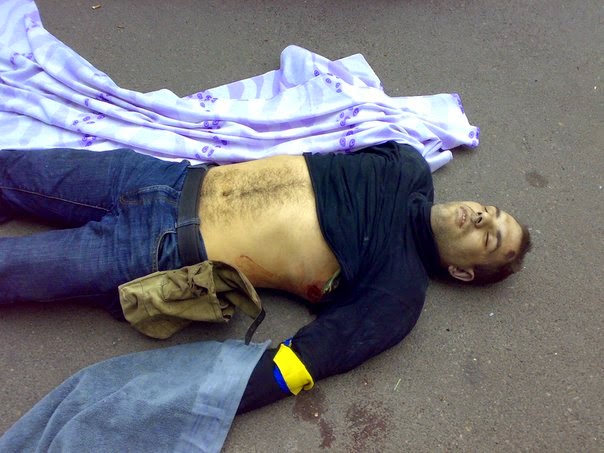 The talk between Kolomoisky and Tsarev. Is that not the  Jew above whom Kolomoisky has in mind?  https://youtu.be/oREgeECKhU4

From publications in the forums it is reported that in Mariupol in the police department were shot and burned 52 policemen for the fact that they did not want to shoot in their relatives, in their own people. The kingdom of heaven to you. You are our heroes.
Publications about this crime, videos, and photographs:
http://www.rg.ru/2014/05/12/mariupol.html
http://posledniyrubezh.org/novosti/boi-s-fashistami-v-mariupole-sobytija-na.html


Analyzing the causes of this tragedy, the date of the Victory Day in World War II draws attention to itself.

In the US international scientific journal is published an article "Review of the Nuremberg Trials," where it is suggested to continue the Nuremberg trials on the basis of newly discovered circumstances. The main reviewer of the magazine calls himself a professor at Stanford, and US Ambassador to Russia Michael McFaul  http://russ-history.blogspot.ru/2015/04/ww2-ww3-revising-nuremberg-war-crimes.html

In the appendix to the article it is  pointed out about the involvement of American Rabbis in organizing  the Second World War, see rus http://russ-history.blogspot.ru/2013/03/revision-der-nurnberger-prozesse.html


Mr. Lyashko who commanded all those shootings of the Ministry of Internal Affairs, is under control  of  the Jewish oligarch Igor Kolomoisky. Kolomoisky, nicknamed Benya, known as an activist of the radical American Jewish sect, Chabad, whose headquarters are located not only in Brooklyn, New York, but in Dnepropetrovsk in Ukraine. There is also the headquarters of the Right Sector and their leader Yarosh - a Jew, a citizen of Israel. Thus, it is necessary to clearly articulate that it were the extremist militants of the American Jewish Chabad sect attacked the city police department and killed police officers. 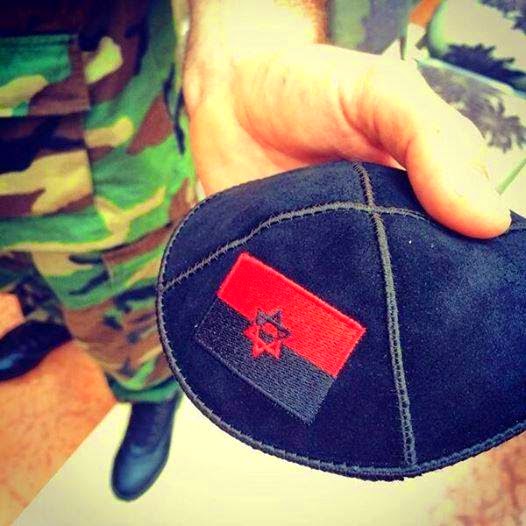 American extremist Jewish sect Chabad is known for its declarations that it is necessary to destroy the Russians and capture a fictional Jewish Khazaria in Ukraine and Russia, to revive a new Jewish state. The unleashing of hostilities in the South-East of Ukraine is precisely their plan, which is known since 1994  http://russ-history.blogspot.ru/2015/08/ukraine-american-jewish-fascists.html

Thus, Kolomoisky does not act on his own initiative, and the government in Kiev and all of the Ukraine is coordinated by the Jewish rabbis in the United States, who in turn, also are responsible for the Second World War.

Russian President Putin not once opposed the attempt to rehabilitate Nazi fascism, but it is precisely what is currently being pushed in Kiev. The initiators of the rehabilitation is also the Jewish sect, Chabad. See photos from the museum of Jewish history in the synagogue Chabad in Dnepropetrovsk, when Saakashvili was there recently. The pictures show the exposition at the Museum about the Jews in the UPA army – Ukrainian Uprising Army under Hitler. In connection with this it is necessary to immediately request to declassify the case -secret to this day - of the tragedy at Khatyn and other crimes in the occupied territories of the USSR during the Second World War. The Holocaust is a lie. The exposition of the Chabad sect at the museum in the synagogue in Dnepropetrovsk is the proof. 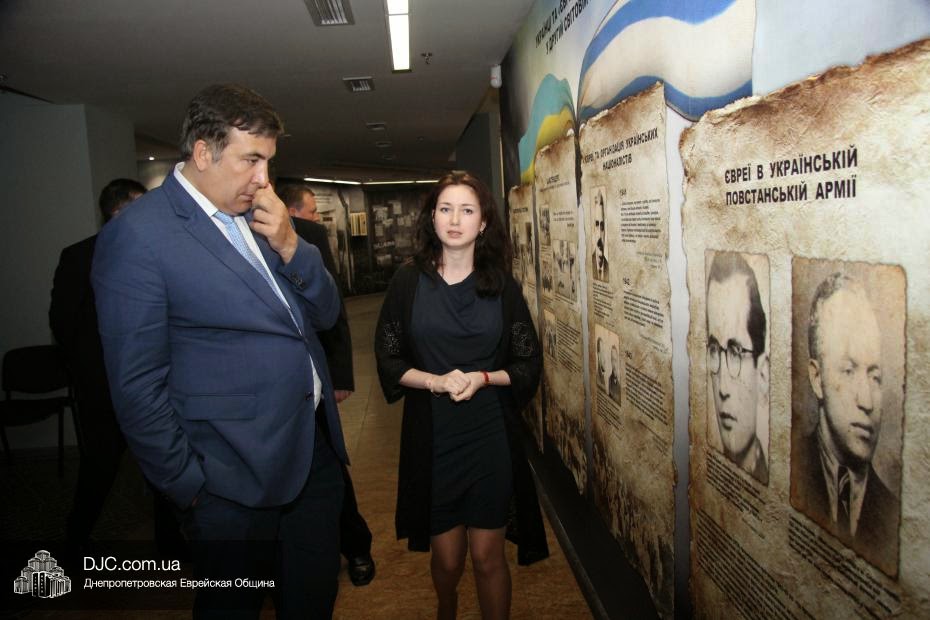 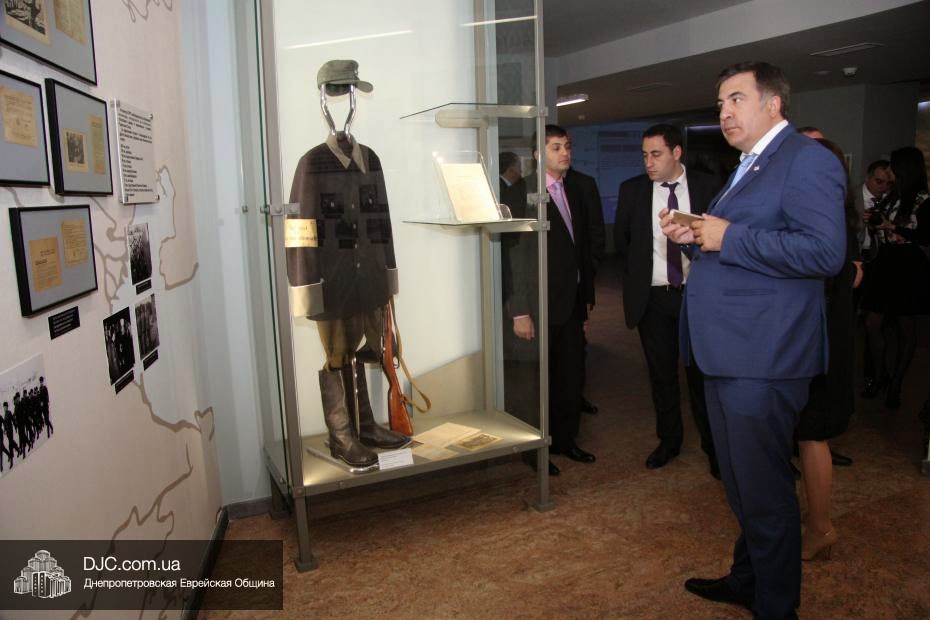 Saakashvili has s "template gap" about the Holocaust. He will chew his tie again. For us, in this case the picture becomes clear, which has been published by Western colleagues on the subject of genocide in Russia, about the goals of the last genocide and the apparent continuing one today. 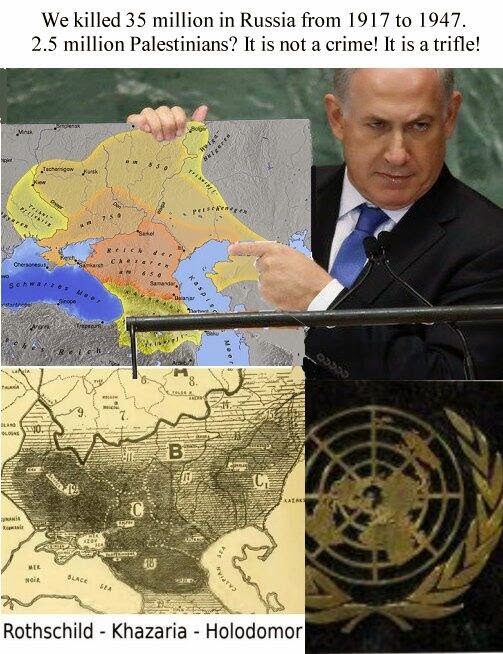 Thus, the population of the Soviet Union (Russia) has previously been subjected to the Jewish genocide and now they are obviously trying to continue the old theme. Again, Georgians, Jews again. Everything is old and well known in Russia! It is necessary to close the topic and start the International Criminal Court - to continue the Nuremberg trials on the basis newly discovered circumstances.

Information confirmed. Is Chabad the US and the IDF of Israel http://russ-history.blogspot.ru/2018/02/blog-post_7.html 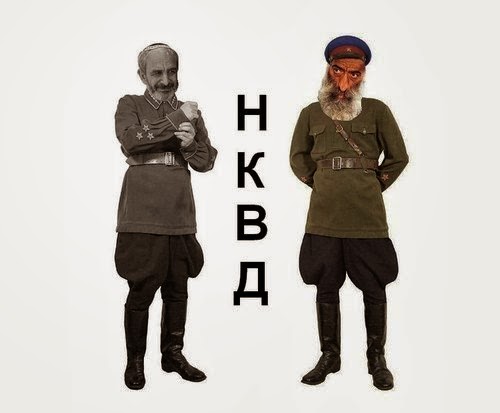 The New World Order? They haven’t served their time for the old one yet!

The battle for the Khazars. The Crimea. The history of the 20th century http://russ-history.blogspot.ru/2016/05/the-battle-for-khazars-crimea-history.html 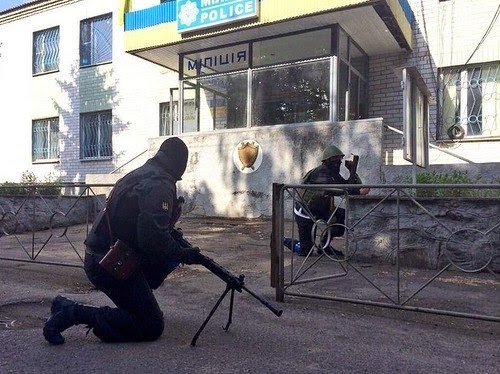 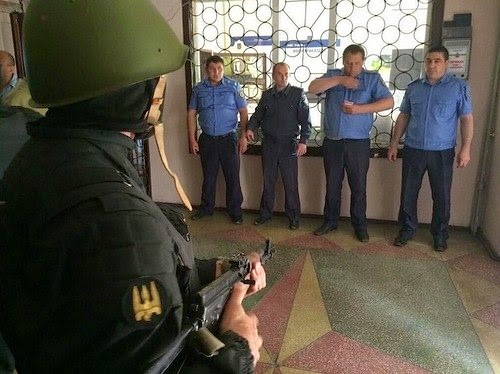 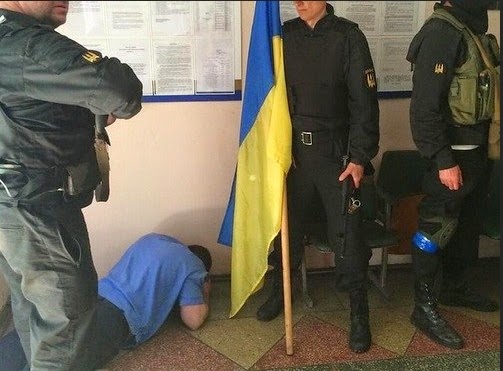 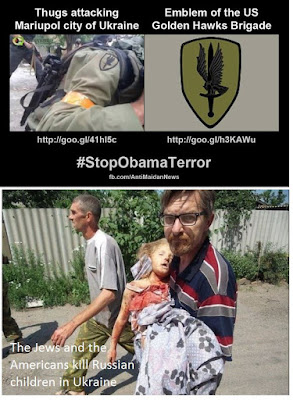