On August 12, 2000 happened the biggest disaster in the history of Russian (and Soviet) nuclear fleet. During exercises in the Barents sea the submarine K-141 "Kursk" (project 949A) has not been on line in the set time. According to the plan of training from 11:40am to 13:40pm the boat was to launch a cruise missile and torpedo firing at learning targets (according to other sources only a launch of training torpedoes). On board were 24 cruise missiles P-700 "Granit" (which can carry a nuclear charge) and 24 torpedoes. Emersion, and establishing a contact with the report was scheduled for 13, or 15 hours. On August 12 at 11:28am Norwegian seismologists recorded an impulse with the force of 1.5 points on the Richter scale, taking into account the distance to the epicenter (175 km. from Severodvinsk) which is equivalent to the explosion of 100 kg of TNT, and after 2 minutes another one at 3.5 points, which corresponds to 1-2 tons of TNT.

A well-known Russian expert scientist gunsmith, doctor of technical Sciences, laureate of the State prize of the USSR Dmitry Vlasov in an exclusive interview to "Komsomolskaya Pravda" in detail restores the picture of the shipwreck.

"On Board is an  emergency torpedo. Let me shoot..."

- I’ll start with the fact that the lost submarine lay on the bottom of the sea with a raised periscope. "Kursk", as far as I know, according to the plan of traininng was supposed to be at the depth of 50 - 70 meters. Its ascent to periscope depth means that there were some extraordinary circumstances. Apparently, the boat commander Gennady Lyachin was to inform the command of something urgent.

- But are such communications made through the periscope? The nuclear sub does have the radio...

- This is a typical question of a dilettante. Because the submarine has a periscope and retractable devices. Each has its own function. Optical periscope is needed to inspect the surface of the sea. Radar monitors over-the-horizon objects and so on. You can raise each periscope individually, or en masse. But what is fundamentally important is that the commander is required to encrypt the message to the headquarters of the fleet. And, as far as I know, Lachin did not encrypt.

The most important one. Which is illuminating. I learned it not only from ours, but from foreign sources. I note especially: in our headquarters allegedly there is no official document confirming the recent report by Lyachin ashore on August 12. But such a document exists abroad. I have the text message published in the Bulletin of the American geophysical society. It says that the commander of the ship Lyachine received a radiotelephone report from the torpedo compartment of the submarine. The officer reported that the compartment has an emergency torpedo.

The command of the Northern fleet refuses to comment on this fact, or categorically denies it. Source: http://www.nasledie.ru/politvnt/19_45/article.php?art=15

I.e., the myth of an emergency torpedo came from USA, not from the command of the Northern fleet of Russia. Well, if there are Americans, it is of course necessary to investigate. They did fly to the moon, didn’t they? They know exactly what the sailor said in the latrine to the Midshipman.

On the photos of the boat Kursk after lifting clearly you can see the outline of the dent and round hole. What is it? 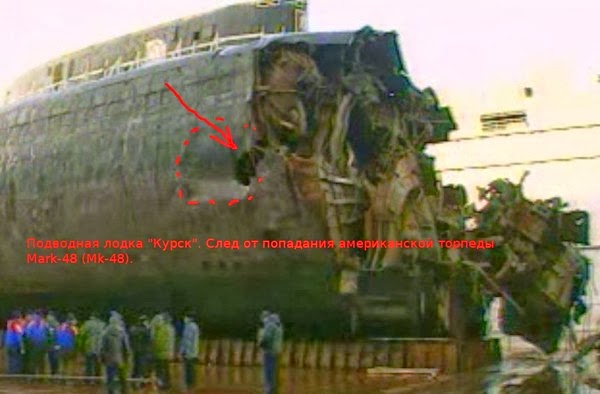 Seek information and find the film "Submarine in troubled waters", where the right information is given, this is an American torpedo MK-48.

Movie: "Submarine in troubled waters",  http://www.youtube.com/watch?v=6X4afTIDvs8
MK-48 is interesting because it accelerates and hits the hull of the ship, doesn’t explode immediately. In the head part there is made a construction for breaking through obstacles like armor-piercing shells and bullets –a core with a flat cut. Here we have a similar design. After penetration of torpedoe into the ship, it explodes inside the body, in the middle, between the bulkheads. This achieves the effect of tearing the ship in half. Watching footage of tests of the MK-48 on surface targets.

When comparing a coincidence of damages at Kursk and surface ships is observed.

Moreover, previously there was no testing of the same torpedo in real combat submarine  and the professionals know only about the tests at surface targets.

In the same way the whole front of the  body of submarine Kursk was blown off. Bulkhead (supposedly strong) between sections 1 and 2. In the space between the boards the bulkhead between ЦГБ should correspond to it. 1 PB. 2 LB. Platform in section 1 A. A dent in the right board. A strong bulkhead seen on the photos taken from the right board 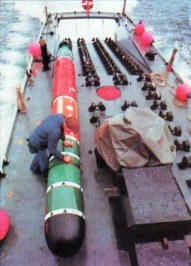 On English-speaking forums of flight crews of civil aviation they know the whole topic and add even more frightening:
The issue of the killing of opponents is very important in the United States. To kill Larry McDonald were involved the air force and the U.S. Navy. Even the Russians and the Japanese know all about this case, Korean Boeing, 1983. – was not shot down near Sakhalin but near the Japanese Islands by the Americans.
It was necessary to kill the biologists after the investigation in Israel –they were shot down by a missile air defense of Ukraine.

In the US there was a problem how to kill without a trace, to be "clean"?

That’s why they made the script of September 11, 2001 "air attack"! After 9/11 there was formed a technical assignment for development of control units for aircraft with a "flight termination" from the control Center. These units are already installed on the aircraft.

August 12, 2000 at 11:28 am Norwegian seismologists recorded an impulse with the force of 1.5 points on the Richter scale, taking into account the distance to the epicenter (175 km from Severodvinsk) is the equivalent of an explosion of 100 kg of TNT, and after 2 minutes another one of 3.5 points, which corresponds to 1-2 tons of TNT. The first explosion was the torpedo, and the second "Bang" was the hit of the boat on the bottom. It all fits together.

The Military of Russia is sure that the Russian submarine Kursk with the crew was drowned for two reasons:
1. Testing of the new German guidance system on an old American torpedo. The tests were successful, "she drowned", the U.S. military can put the proven torpedo on their weapons.
2. An attempt to make a third world war. Everything should be investigated thoroughly. All these cases must be open to the international community so that it is confident in its security.

by Anton Kolmykov
to reward: PAYPAL


The Chernobyl disaster was a terrorist attack. Article for special services http://russ-history.blogspot.ru/2015/04/the-chernobyl-disaster-was-terrorist.html