The USA have captured Germany in 1918-1919. January 15, 1920 general G. Allen, American forces commander in Germany, has entered the following notice in his diary: “According to the American point of view, Germany - strong, and at the same time in American financial bondage, must become the major armed force of the USA in Europe.” [2]

Later the USA have brought Hitler to power in Germany and Stalin in Russia. Hitler and Stalin were both puppets in the hands of the USA.

Hitler determined Jews by their ethnicity: he emphasized their features and began their liquidation. But those were Ashkenazim whom the Sephardic Jews did not consider as Jews. That’s why the subject of Holocaust requires most thorough research as something different is hiding behind it. Just think: 150 thousand Jewish soldiers and officers of Hitler army could repatriate to Israel according to the Israeli law of repatriation. [3]

Protestants in the USA. Jehowa’s Witnesses is a Judaic sect. The works of the sect founder Charles Taze Russel (16.02. 1852- 31.10 1916) indicate Judaism and Zionism, but not Christianity. 1878 became the year of decision making in the history of the Jewish people. Orthodox Jews achieved prominence. At that time Russel was consumed by a new doctrine. He has developed a doctrine supported by a number of Jewish leaders in America and Europe. This is what he taught: Jews do not need Jesus, there shouldn’t be any messiahs among Jews, it was wrong for the Jews to accept Jesus as their Lord and Redeemer. The land of Palestine belonged to the Jewish race (they are not a race but a family) and now God was calling them back to Palestine. Russel was the first Zionist.

Russel visited Jewish leaders around the world – he travelled in the United States and abroad. He appeared in many meetings with lectures. His topic was “to teach to preach the return of the Jews to Palestine” as well as “the future Jewish government and the State of Israel”. In 1910 Russel was greeted by thousands of Jews at New York City hippodrome. He promoted the idea to bravely take away the land of Palestine.

1914 was the year of World War I beginning and the World Zionist Federation initiated immense pressure upon the British  government to declare Palestine homeland of the Jews. Jehowa’s Witnesses think Jesus’ presence has begun invisibly.

According to their understanding of Biblical chronology, the time of invisible Christ’s presence upon His return began in  the fall of 1914 when the full-scale military actions of World War I have started. [4]

On the photo is seen the battlefield of World War I. 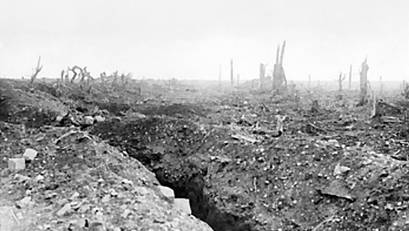 “Those living on Earth Jehowa’s witnesses will not participate in the annihilation of evil people in Armageddon, they’ll  just watch how it would be done by God; however, those resurrected ones for the heavenly life Jehowa’s witnesses from those “anointed” ones - or 144 000 - under the leadership of Jesus Christ will take immediate part in the annihilation of the evil ones as “spiritual persons.”[5]

In other words, way back in 1914 it was preplanned to annihilate all the people just leaving 144 000 on Earth? It is  obvious that the idea of the Russel & Co sect organizers has left its trace in their texts of Jehowa’s witnesses who consider themselves protestants but in reality they are a Judean sect.

Considering the logic of the public enemies, they have arranged an Armageddon for us and we have survived it in the 20th  century as two World Wars etc. That’s why the history of WW I and WW2 requires most thorough research. Historians still keep arguing but it seems sufficient to conclude the following:

The purpose of WW I was:
- Destruction of Europe;
- Conquest of Russia and Germany and their destruction;
- Creation of the state of Israel;
- Utmost killing of the Goyim (Gentiles).

The goals of WW2 were:
- Creation of the state of Israel;
- Destruction of Europe and Russia;
- Utter killing of the Goyim (Gentiles).

As of 1944 Germany still kept currant contracts about military and technical provision with USA (Rockefeller & Co). Rockefeller was providing Germany, among other things, with Zyclon B gas for gas chambers and of course American specialists have considered suggestions from “consumers” by improving, executing technical assignment, training on the spot, employing technologies. [7]

The USSR was run, most likely, directly from the American Embassy and Stalin was just a puppet. The key player was the NKVD  (People’s Commissariat of Internal Affairs), KGB (Committee of State Security). That was, most likely, the occupants’ structure, running the colony, and its leaders were CIA (State Department) staff members.

In connection with the above mentioned it becomes clear that the annihilation of USSR military cadres before the war and  complete neglect to take measures to protect USSR against Germany’s attack had its purposes:
- Maximal USSR population losses;
- Wide scale warfare on vast territories with maximal losses of civilians;
- Prevent curbing the war as a near border conflict;
- To secure maximal losses of both sides.

Was it possible not to observe such a plan? 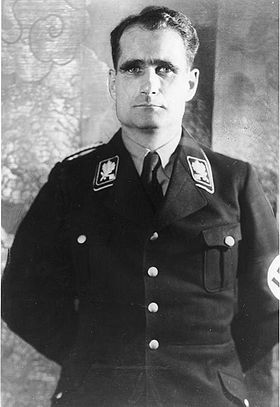 Official information:
May 10, 1941 Rudolf Hess, being furer’s deputy of the Nazi Party, according to the official version,  secretly from the Nazi leadership, has flown to Scotland with the purpose to propose to the British government to conclude peace and together fight against the USSR.

Unofficial information:
Hess tried to tell the British that Germany was run by the USA. He didn’t suspect that the British government knew that and were the traitors to their own people. Rothschild &Co was in cahoots with Rockefeller & Co. WW2 has been planned together by Jewish and Anglo-Saxon groups.

Rudolf Hess was definitely a hero of the German people. He fought bravely at the frontlines of WWI: first he was a  battalion commander, then he was a pilot of “Richtgoffen” squadron headed by Goering. He was wounded twice, was awarded with 2 Iron Crosses. He was a lieutenant when the war was over. He knew first hand what war was about. He tried to prevent the war.

Hess didn’t participate in the war against the USSR, but in 1945-46 he stood the Nuremberg trial being the 2d after Goering  on the list of the war criminals. He was sentenced to life imprisonment (a Soviet judge insisted on corporal punishment, expressing his special opinion). Hess was imprisoned for life at Spandau prison in Berlin. After release of Speer he remained the only prisoner at Spandau. He never repented in anything. His last word at the Nuremberg trial was: “I don’t regret anything.” 30 years later in a letter to his son he wrote the same words.

Historian Alexandr Osokin: “By the end of  the 1989s when the USSR leadership was finally inclined to free the 93 year old prisoner from life term he was murdered – strangled at Spandau prison with imitation of suicide.”

At the time of his death August 17, 1987 there was nobody at Spandau prison representing USSR authorities. The prison was run in turn by USA, England, France, USSR. The official conclusion was written by British administration. One can assume they were the ones who killed him as his confessions would be dangerous for the ruling regime of England. After Hess’s death the prison was immediately demolished in such a haste that it was impossible to conduct a second inspection of the spot of crime. Rudolf Hess’s son engineer Wolf Rudiger has for 14 years carried on the investigation of his father’s death until he died of a heart attack. He described in detail the way he saw what had happened on that day at Spandau:
”My father was killed by 2 Mi-5 secret service agents who changed their uniform (even though usually it’s Mi-6 agents who liquidate  unwanted people abroad). The USSR KGB was not informed about the planned operation. It has been done so quickly that it didn’t even get its usual code name. The agents arrived at Spandau prison upon receiving the necessary instructions. They tried to strangle my father with a 4 feet cable, but he began to break away and cry for help – later about that gave his evidence an American sergeant Jordan.

Later followed “artificial breathing” resulting in broken ribs. In 1989 they have given me Hess’s complaint to the Spandau administration (the experts have confirmed he wrote it April 4, 1987) where he demanded to fire the security guard who told my father: “when you decide to commit suicide make sure you call me for help.”

I also have an audio recording of a conversation of 2 officers made by the special service at prison:”The summer house in  the garden will be burnt down within 48 hours and even the main evidence – the electric wire – will turn into smoke. Nobody  will ever be able to prove the old Nazi didn’t hang himself.”
The house was indeed burnt down and the Spandau prison itself was demolished in a week –a shocking speed. When the body of my father was exhumed by the internationally known professor Spann in Munich it became evident that he was first strangled and later hung on a lamp wire: on his neck is the double trace from the noose. I passed the documents to Scotland Yard which opened “a case of murder”. Soon, however, by the general prosecutor Alan Green the case was stopped without explanation of the reason.” 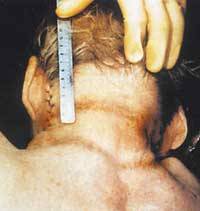 On the photo of the Munich court medical expertise resolution can be clearly seen two bands – the lower band from the string from the first strangulation, and higher up another one from hanging up. (8-9)

The article’s author proposes to prolong the Nurember trial on the basis of newly discovered circumstances without revision of current boundaries.

It is necessary to consider the opinions about prevention of WW2 aftermath revision and the Nurember trial should considered as an opinion of criminals who are still socially dangerous and are a threat to humanity. Both such people and their opinions are a threat to humanity. Again they are planning to implement the same ideas as Pol Pot (Salot Sar) in Cambodia (Campuchia), but with transfer onto the whole world which is a conscious annihilation of population.

It’s necessary to remind that Pol Pot studied in Paris and most likely it was no accident that he headed a former French colony Cambodia, having killed later most hideously and sadistically 2-3 million people. In order to save food the extra people were simply killed on industrial scale. Similar ideas are openly proposed today by certain people in USA which demands a legal assessment.

Chernobyl is a terrorist act. Article for special services http://russ-history.blogspot.ru/2015/04/the-chernobyl-disaster-was-terrorist.html

US confirms everything. They plan to continue to kill!